by Prinsloo Miyambo 7 years ago6 years ago
76views
0

It has been a while waiting for the release of Google’s project Ara, the smartphone  that is made up of swappable components. It turns out that it was delayed because of the system’s electropermanent magnet. Apparently the phone has failed the drop test. 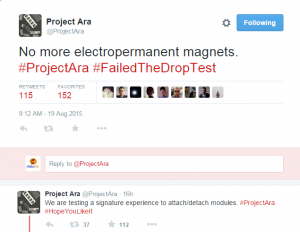 We only hope that Project Ara has found a real solution to this problem. Well it seemed easy for a concept of putting together a smartphone  that allow users to remove and replace components anytime. But this was going be possible through the system’s electropermanent magnets.

How do the electropermanent magnets work?

Unlike traditional magnets, Project Ara’s electropermanent magnets use short pulses of electricity to stay magnetized, allowing the modular pieces to remain in place. It was a clever alternative, and allowed users to easily swap parts as needed.

With electropermanent magnets no longer an option, the team said it will instead utilize a “signature experience” to attach and detach modules. No clue what they’re alluding to, but it sounds awesome.

Project Ara teased an announcement for a test-launch in the U.S., so hopefully we’ll learn more soon.

Via: theverge and technobuffalo