by Prinsloo Miyambo 7 years ago7 years ago
34views
0

Google’s got truly brilliant engineers in its ranks, but some could use some sharpening of their comedic skills. Today the company tweeted a clarification saying that its Project Ara modular smartphone didn’t actually fail any drop test. The Ara team is still reworking how modules attach to one another, but the change apparently wasn’t inspired by Ara breaking APART; Google simply found a better way. “We have been configuring a new solution,” the Ara group tweeted. “It’s better too.” 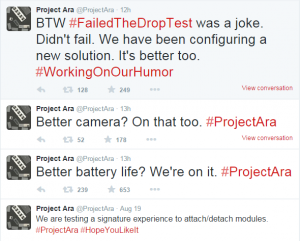 Project Ara is also getting a better camera and longer battery life, according to two other tweets posted today. Back at Google I/O, the company wowed its keynote crowd by assembling a functioning Ara model right on stage and snapping a photo . But the quality of that image left something to be desired. 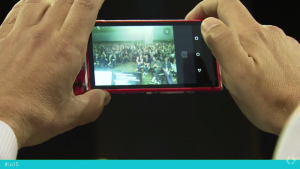 On Monday, Google revealed that it was backing off plans to conduct a Project Ara pilot in Puerto Rico later this year. The company is now targeting a 2016 introduction and says it’s looking into “a few locations” in the US where Ara could make its consumer-facing debut. Project Ara team has promised more details on what’s to come “soon.”