by Prinsloo Miyambo 7 years ago7 years ago
126views
0

Back in August, Microsoft-news reported about Samsung’s upcoming Windows 10 tablet. The Windows 10 tablet is expected to pack a 12-inch Super AMOLED display with a resolution of  2560×1600 or 3840×2400 pixels, a 14 nanometer Intel Core M processor, 4GB of RAM, and the S-Pen, according to previous reports. Now, it seems like the device has passed Wi-Fi Certification. The device’s model number is SM-W700, according to the Wi-Fi certification: 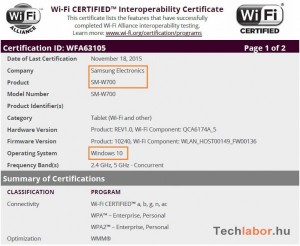 Of course, it isn’t yet clear when the device will be coming to the market. The device could be announced at the Mobile World Congress 2016, where Samsung will be launching the Galaxy S7. However, since it’s passed Wi-Fi certification recently, Samsung may launch the device sometime soon.  There is no information on the device’s price just yet. 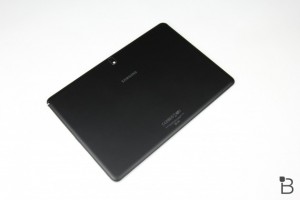